When Did People First Use Showers?

It’s safe to say that no matter what our differences are, just about everyone takes showers. Whether you have a simple, standing-only shower or a large, custom-tiled glass enclosure, you probably regularly take showers and never think twice about how this device works or how it was invented. The professionals at More Than Glass in Richmond, Virginia have put together this article to show you how showers have changed throughout history from their initial conception to the elegantly designed statement pieces they are today.

Bathing can be traced back to prehistoric times. We know today that ancient Egyptian and Mesopotamian civilizations put emphasis on hygiene and that these two civilizations possibly saw the first ever showers. These rudimentary showers existed in wealthy homes and consisted of an individual standing in a basin with servants pouring water over them. During this same time period, the ancient Greeks began using showers as we know them today in the gymnasiums that they used for gameplay and sporting events. The Greeks developed some of the first aqueduct structures and pumped water into spouts in public shower rooms.

The Romans took the idea of public baths to another level, adding complex water systems and more advanced aqueducts that sometimes even took advantage of hydrothermal springs. These intricate bathhouses were located in public spaces and often included drainage systems, pumps, heating, and a sewage system.

After the fall of the Greeks and the Romans, the shower did not continue to advance technologically. Public bathhouses became a bit more taboo and people bathed more or less often based on their social status. 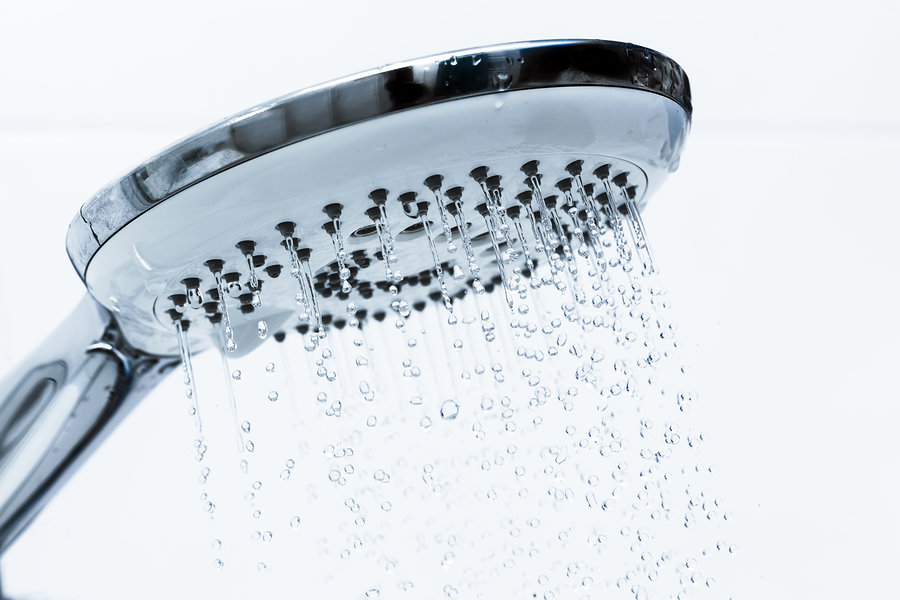 It wasn’t until the 1700s that people began to understand that frequent bathing can be good for human health. In fact, as bathing became increasingly common, people started trying to invent new ways to stay clean. In 1767, the first modern mechanical shower was invented by William Feetham in England. His initial shower design included a pump that pushed water into an overhead container that could then be released with the pull of a chain.

In the early 1800s, the first designer shower was invented. This shower called The English Regency, which was built from a simple metal frame, featured a hand pump that would circulate water through an overhead spout. With the advent of indoor plumbing in 1850, these showers could be attached to a water source and therefore became much more commonplace than ever before.

Since the modern shower was invented, they have become a staple in bathrooms around the world. According to the U.S. Environmental Protection Agency, baths typically use up to 70 gallons of water with each use. A standard, 5-minute shower uses just 10-15 gallons of water. Showers also give homeowners a chance to showcase their stunning creativity through the intricate tilework and elegant glass features used in modern shower enclosures.

If you’re looking to install a shower enclosure of the future, contact the professionals at More Than Glass by dialing (804) 746-3086. Our team has over 15 years of experience working with glass shower doors so you can rest assured that your new glass enclosure is safe, stunningly beautiful and ready to enjoy for years to come.

See what our clients are saying about our products and services.

After an extensive search to have installed mirrors in our gym in the Northern Neck area for a glass company we found More Than Glass. From the time I introduced myself to the final installation, their team of experts were professional, responsive, timely, precise and just overall impressive. I’m quite picky about who I hire for expert services and I would 200% recommend More than Glass for your glass and mirror requirements. We will clearly use them again for any future needs.

I was more than pleased

I was more than pleased when I contacted your company to help with a shattered sliding glass door in the sun room. I contacted your team via internet form in the morning. I received a call that afternoon and your people came out to give me a quote the next day. The following day, he came to do the repair. Thanks for your teams reliability, efficiency, and expertise!

I Refer More Than Glass

I bought a large piece of glass (4'x9') to cover our kitchen table. They offered options for the edge and corners and had my glass ready in a couple of days. I picked it up and they helped me load it in my vehicle. Whenever someone asks where we got the glass, I refer them to More Than Glass. Very happy with the product and service.